[introduction to the collection]: after the victory of the northern expedition in the 16th year of the Republic of China, the national government set the capital in Nanjing. The Nanjing Mint took the original mold and recast the commemorative coin of Sun Yat Sen's founding, and then changed the English and lace (hexagonal star) on the back to form a new version, commonly known as "small head", with a bust of Sun Yat Sen engraved on the front, with "Republic of China" on the upper edge and Jiahe figure on the back, around the word "one circle", There are 15, 16 and 18 years of the Republic of China, Mausoleum, earth, no year, Jiahe and other editions. Among them, Sun Zhongshan Mausoleum coins were cast in 1927. Nanjing national government built Zhongshan Mausoleum to commemorate and cast mausoleum commemorative silver coins and commemorative bronze medals. It is said that only 480 coins were minted, which were given to Party and government officials and personnel escorting the coffin. 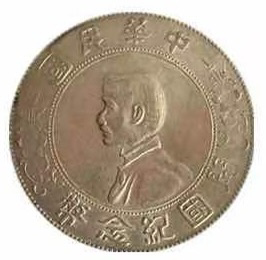 The founding commemorative coin of the Republic of China, sun xiaotou, has a round head. It has a good appearance, appropriate thickness and good size. From the perspective of its machine casting process, weight and silver content, it meets the standard of sun xiaotou coins. The genuine product is undoubtedly very rare. Inside the obverse circle of the coin is a portrait of Sun Yat Sen, which is engraved into the bone, concave and convex, and has a strong sense of relief; The four characters of "Republic of China" in Chinese clerical script are engraved on the upper edge, the five characters of "Founding commemorative coin" are engraved on the lower edge, and the left and right long branches are decorated with flowers. In the center of the back is the Chinese official script "one circle", with a huge and full Jiahe, with the words "memento" on the upper side and "birth of Republic of China" on the lower side, dotted with left and right hexagonal stars. The coin is very rare, integrating hollow spike, long branch flower, hexagonal star and English. After a hundred years of trials and tribulations and repeated wars during the period of the Republic of China, the founding commemorative coins of the Republic of China have suffered heavy losses and are very rare in the world at present